ALA is today run by Grönholm, Nousjoki and Woolston and employs an international team of 50 architects, designers, students and staff members. The partners are directly involved with all aspects of the studio’s design work, and take a very hands-on approach at the critical stages of each project. All of them have around 20 years of professional experience, mostly in designing large public buildings both in Finland and abroad. In addition to the daily office work, they have taught at three Finnish universities: Aalto University, Tampere University of Technology and University of Oulu, as well as at two North-American universities; Columbia University and Washington University in St. Louis. In 2012 the ALA partners received the prestigious Finnish State Prize for Architecture.

ALA has most recently completed the Helsinki Central Library Oodi and the renovation of the Finnish Embassy in New Delhi. Other built projects include the Aalto University and Keilaniemi metro stations along the western extension of the Helsinki metro line, the renovation of the Dipoli student center and its repurposing as the main building of Aalto University, the renovation and expansion of the Kuopio City Theatre, as well as the new Lappeenranta City Theatre. The studio currently works on such projects as Helsinki Airport’s new departures and arrivals building, three more metro stations along the second leg of the western extension of the Helsinki metro line, a Courtyard by Marriott Hotel in Tampere, and a new university library in Lyon. 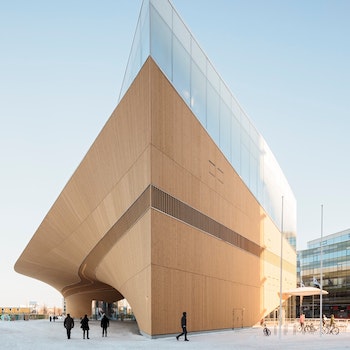