Cristina Díaz Moreno & Efrén García Grinda are principals and founders of the international recognized architectural practice amid.cero9. Founded back in 1997 as a collaborative platform to investigate the intersections between architecture, culture and nature, the practice has evolved into a research-based design practice focused on contemporary urban, technological and cultural challenges. Intensely committed to the development of methodological disciplinary processes, amid.cero9´s projects combine constructive precision with conceptual clarity and uncover the specific opportunities and special nature of each context, cultivating an approach to the contemporary notion of space that enlists sociology, technology, media and politics.

With a vast academic experience, they have been recently appointed Professors and directors of the Studio 1 in the Institute of Architecture at the Angewandte, Vienna, succeding Zaha Hadid (2000-2015) and Kazuyo Sejima (2015-2019). They have been Visiting Lecturers at SOA, Princeton Universtity (2017-), Diploma Unit Masters at the Architectural Association (2009-18), Visiting Professors at the Institut für Kunst und Architektur at the Akademie der Bildenden Künste, Vienna (2013-14, 2018-19), Design Critics in Architecture and co-directors of an Option Studio at the GSD, Harvard University (2015-2017) and Visiting Professors and Unit co-directors in the SAC StädSchule Architectural Class, Frankfürt (2016-2017). While teaching together in Madrid from 1998 till 2013 (in parallel at ETSAM and ESAYA UEM) they have been visiting professors and lecturers throughout Europe, Asia and the US. Their work is part of the Permanent Collection of the Pompidou Center in Paris and has been exhibited in the Biennale di Architettura di Venezia, Official Section in 2010, 2004, 2000, Spanish Pavillion in 2014 and 2002 and Greek Pavillion in 2014, among others. Their projects have been widely disseminated and they have won more than 40 prizes in national and international competitions. The projects and writings of their first fifteen years were documented in 2014 in a publication entitled “Third Natures, a Micropedia” and an exhibition at the AA, London. Recently a monographic issue on their work have been published in El Croquis (nº184) and their work on public space have been presented in a solo show entitled Vaults Beds Gardens at SOA Princeton University (2019). 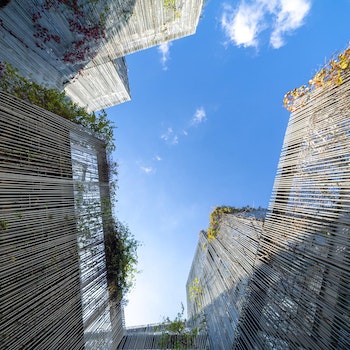