Yvonne Farrell and Shelley McNamara co-founded Grafton Architects in 1978 having graduated from University College Dublin in 1974. They are Fellows of the RIAI, International Honorary Fellows of the RIBA and elected members of Aosdána, the eminent Irish Art organisation. Teaching at the School of Architecture at University College Dublin from 1976 to 2002, they were appointed Adjunct Professors at UCD in 2015. They have been Visiting Professors at EPFL, Lausanne from 2010 – 2011. They held the Kenzo Tange Chair at GSD Harvard in 2010 and the Louis Kahn chair at Yale in the Autumn of 2011. Currently, they are Professors at the Accademia di Archittettura, Mendrisio, Switzerland.

In 2018, Yvonne Farrell and Shelley McNamara were the Curators of the Venice Architecture Biennale. Their manifesto : Freespace was the title of the Biennale.

Directors Gerard Carty and Philippe O’Sullivan have been with the practice since 1992. They are accomplished teachers and architects and play a central role in the life of the practice

Grafton Architects have participated in numerous exhibitions including : the Sensing Spaces Exhibition in 2014 in the Royal Academy in London; a Pavilion for the 2014 Tercentenary of the City of Barcelona; ‘the Ogham Wall’ installation in 2015 in the Victoria & Albert Museum, London.

The practice has won numerous awards for their work. In 2016, Grafton Architects were honoured by being awarded the inaugural RIBA International Prize for the Universidad de Ingeniería y Tecnología (UTEC) in Lima, Peru. It has recently been announced that they have won the 2020 RIBA Royal Gold Medal.

Shelley and Yvonne have been selected as the 2020 Pritzker Prize Laureates, the award that is known internationally as architecture’s highest honour.

Current projects include The Marshall Institute, Lincoln’s Inn Fields, for the London School of Economics; City Library Parnell Square Dublin with Shaffrey Architects ; Headquarters for Electricity Supply Board (ESB) with OMP architects in Dublin; all won by international competition. 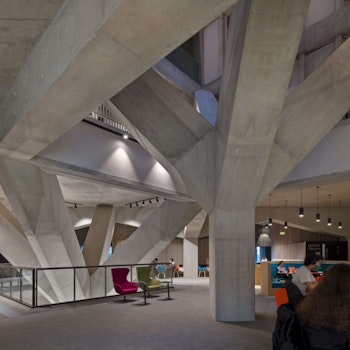