Barcelona architect Josep Ferrando, in keeping with the multifaceted vision of the architecture he defends, is part craftsman, part academic—Dean of La Salle School of Architecture in Barcelona (ETSALS)—and part cultural manager—Director of the Centre Obert d’Arquitectura de Barcelona and the Culture Department of the Architects’ Association of Catalonia-COAC, during which time the institution received the Premi Nacional de Cultura.

With this approach, and in the conviction that the real challenge lies in the management of complexity, his architecture employs method as an analytical tool capable of giving the process the necessary rigour and efficiency to reformulate the model. Concretely, he is committed to establishing rules of the game that are governed by flexible systems, a context that allows him to formulate as many questions as possible and, by means of a balanced blend of research and discovery, identify the precise, unique answer to all of them. With this methodology, and considering monomateriality, geometry and efficiency as fundamental values of his work, Ferrando manages to produce solutions that not only never repeat forms, but are also not predictable, thereby achieving the most appropriate and ingenious architectural outcome for each circumstance.

His work has been shown in various countries, and he has had monographic exhibitions of his work at the Venice Architecture Biennale 2014, the prestigious Architekturforum Aedes in Berlin and the Museum of Modern Art (MAM) in Rio de Janeiro. In 2016 he took part in the exhibition Unfinished in the Spanish Pavilion at the 15th Venice Architecture Biennale, winning the Golden Lion. International recognition includes winning FAD Awards and first prize in the Buenos Aires International Architecture Biennial BIABA’15, and being a finalist in the Iakov Chernikov

At the same time, he has developed an intense teaching career since 1998 as a lecturer in projects at numerous European and American universities and has lectured at prestigious international universities and congresses such as UIA’11 in Tokyo and BIAU’19 in Asunción. 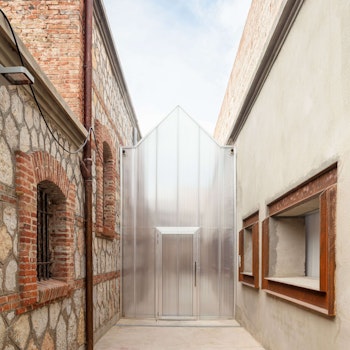