Located on the trapezoid-shaped site of a former sulfur factory, the strong and mineral volume of the Montaigne Multimedia Library visually anchors the future Place du Contr’un, a soon-to-be major public space for the eco-district of Pielles in Frontignan, France.

The building is uniquely innovative. An exterior façade system of load-bearing walls – composed of a system of white concrete slabs sandwiching a layer of insulation – lend the building’s exterior a uniform, identifiable, and sculpted aesthetic. The solidity stands in contrast to the building’s interior with its largely open appearance characterized by ribbed floor slabs supported by a few vertical supporting elements (termed osselets). The result is a floor plan largely unencumbered, one that provides a high-degree of user flexibility.

“A man holding a book moves towards the light; a library starts in the same way.” – Louis Khan

Given the building’s Mediterranean location, orientation was the determining factor in the configuration of openings and exterior bays ...

The Eastern façade is a series of sliding glass bays, these elements protected by porticos and canvas shading elements.

Finally, on the Western side, thin gill-like openings oriented to the North bathe the interior with orchestrated rays of light, while vertical trellis systems create cutouts in the floors and perpendicular running partitions line the outdoor terraces.

The recessed openings create unique folds in the concrete façades of the building, with the wall thickness being sufficiently thick to incorporate multiple components: ventilation ducts and collectors used by a floor-slab heating system, shelving and storage, movable partitions, built-in seating.

The multimedia library is notably the district’s first public building, and seeks to set an example for the region in environmentally conscious design and responsible energy consumption. Its many ecological features attest to these initiatives:

The application of these elements is significant given the client’s request to guarantee interior thermal comfort during summer months, without the reliance on mechanical air conditioning systems. This demand required a great deal of study given the region’s microclimate (premature harvests often occur in the region and the underground temperature rests on-average 1 to 2 degrees above the norm).

To achieve thermal comfort, the design makes use of several passive strategies. The building’s mass, with its compact nature, makes use of the principle of thermal inertia, which thwarts sharp temperature swings and allows for internal temperature moderation. The building also uses the process of free cooling (diurnal natural ventilation) by day, again thanks to the building’s wall thickness that stores daytime heat. By night, the process reverses, the walls “unloading” their accumulated heat by natural or accelerated means (via the utilization of two smoke evacuation turrets).

An interior atrium (designed as a boîte à lumière/boîte à vent) amplifies the building’s use of passive strategies. Outfitted in adjustable glazed slats, the atrium is located at the heart of the building and rises the full height of the volume, three floors in total. Made possible by building codes afforded to library typologies in France, the atrium volume distributes fresh air arriving from slatted, glazed intakes in the exterior façades and exhausts “used” air through a rooftop opening, also equipped with three shields of double- glazed slats, capable of being orientated.

A thermal probe located at the summit of the atrium opening automatically controls orientation and opening of these slats. The opening itself is a sort of “passive chandelier,” one capable of regulating the amount of natural light coming into the building’s interior.

Finally, some fifteen air movers located throughout the building distribute fresh air evenly amongst floor levels, and help to ensure the natural cycle of ventilation continues to push used air towards the summit of the building (convection) and out through its glazed slats.

The building has been recognized with the following environmental certifications: Label HQE (haute qualité environnementale, France) 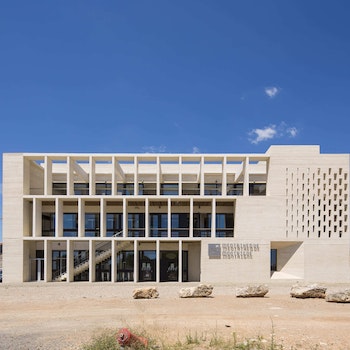 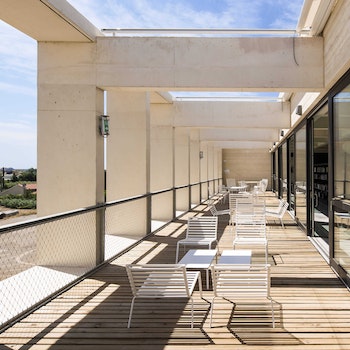 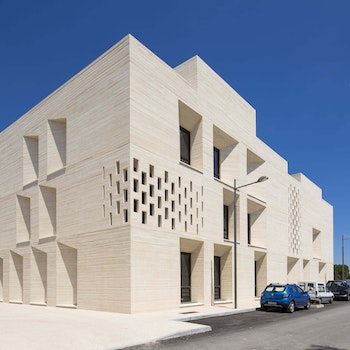 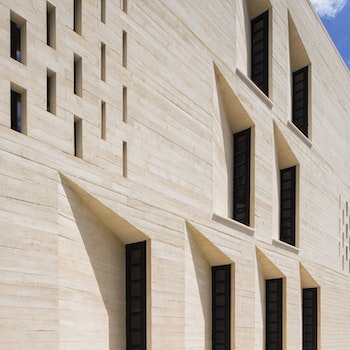 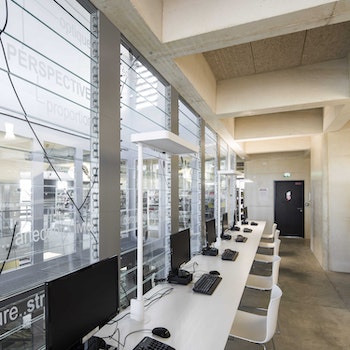 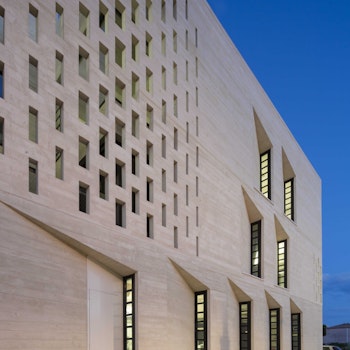 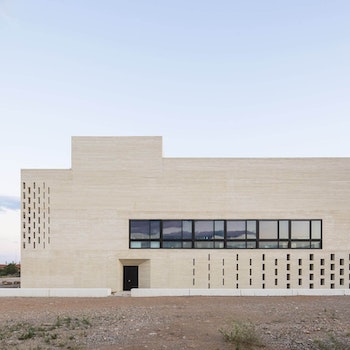 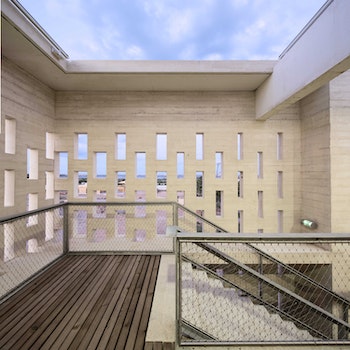 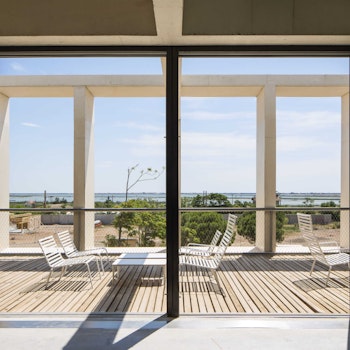 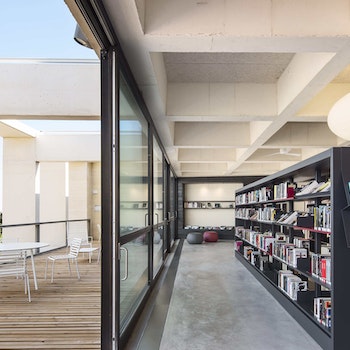 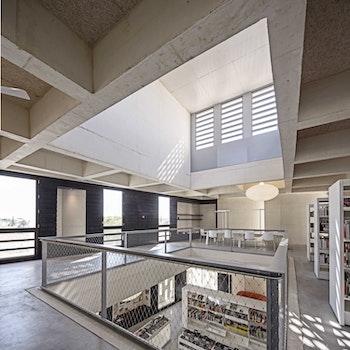 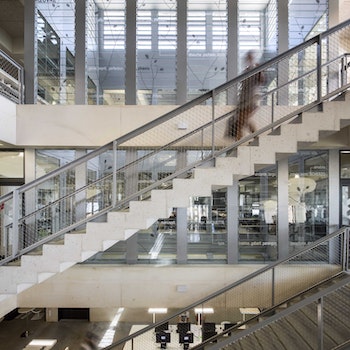 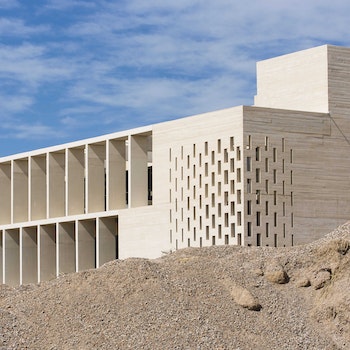 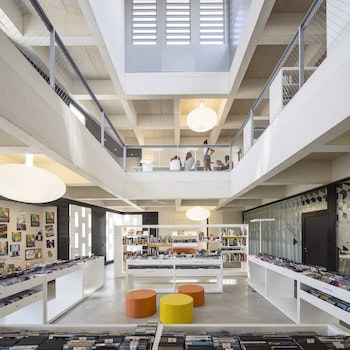 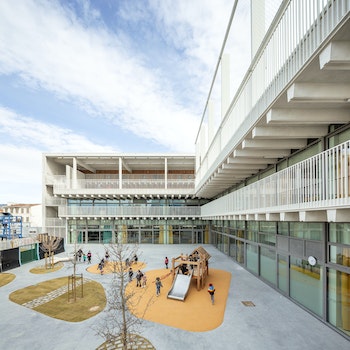 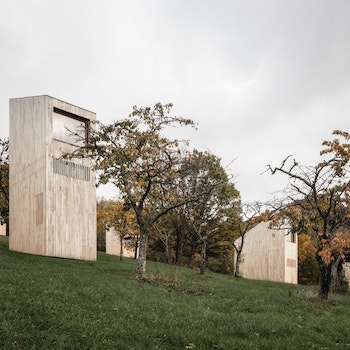 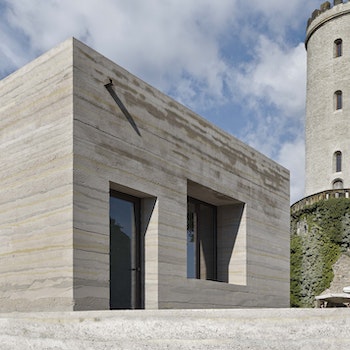